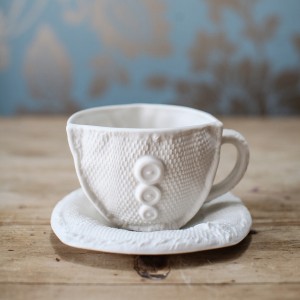 The work of award winning Chesterfield ceramicist Clare Gage will be showcased on BBC 2 this week, when it appears on The Great British Menu displaying the culinary creation of top chef Pip Lacey.

Pip Lacey, head Chef at Murano London, Angela Hartnett’s Michelin starred restaurant in the Heart of Mayfair, is one of 24 talented chefs who are in competition to cater a banquet which will celebrate the centenary of the Women’s Institute at London’s historic Drapers Hall.

Originally from Leicestershire, Pip’s menu is appearing in the Central heat of the competition, where she will go up against two other chefs from the region who have been challenged to produce 21st-century dishes that honour the custodians of first-class home cooking.

The first part of Pip’s four course meal will go before the judges on Monday 28 September, with her dessert course being shown on BBC 2 at 7.30pm on Thursday 1 October 2015.

Explaining her decision to choose Clare Gage’s creations to display her menu, Pip Lacey said: “I chose to use Clare’s cups because of the link to the brief: Celebrating the Women’s institute. They are very unique, hand crafted and made by a woman. The Institute is all about learning new crafts and Clare’s style was perfect for the dessert I did – a play on scones. Scones are something that the Women’s Institute would eat at tea breaks when knitting, so the style of Clare’s cups tied in perfectly. Knitting and baking still go together now.

“I know that the crew liked the cups, but I have no idea as to anyone else’s reaction to them or even myself as I’ve not seen any of the show yet.”

Clare added: “It was an honour to have my work selected by Pip. My collection stems from a real affection for the quintessentially English tradition of afternoon tea, so to have my designs used for a dish that will celebrate the Great British Institution that is the WI seems very fitting.”

The winners of each regional heat will go on to compete in the final where 4 chefs – one for each course, will be selected to cater the banquet. Finals Week and the Banquet show will be aired the week commencing Monday 5 October.