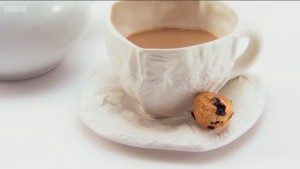 The work of award winning Chesterfield ceramicist Clare Gage was a hit with celebrity cook and food school owner Prue Leith when it appeared in the Central region final of BBC 2’s Great British Menu recently.

Pip Lacey, head Chef at Murano London, Angela Hartnett’s Michelin starred restaurant in the Heart of Mayfair, was one of 24 talented chefs in competition to cater a banquet which will celebrate the centenary of the Women’s Institute at London’s historic Drapers Hall. Pip narrowly missed out on a place in the national final.

Explaining her decision to choose Clare Gage’s creations to display her menu, Pip Lacey said: “I chose to use Clare’s cups because of the link to the brief: Celebrating the Women’s institute. They are very unique, hand crafted and made by a woman. The Institute is all about learning new crafts and Clare’s style was perfect for the dessert I did – a play on scones. Scones are something that the Women’s Institute would eat at tea breaks when knitting, so the style of Clare’s cups tied in perfectly. Knitting and baking still go together now.”

Clare added: “It was an honour to have my work selected by Pip. My collection stems from a real affection for the quintessentially English tradition of afternoon tea, so to have my designs used for a dish that will celebrate the Great British Institution that is the WI seems very fitting.”